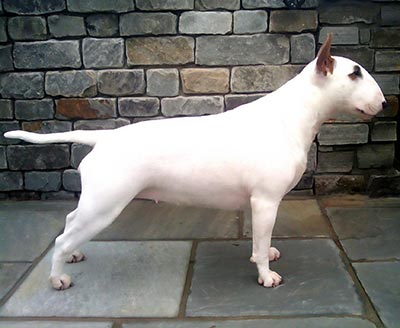 To me, a Bull Terrier is beautiful.  I enjoy just looking at the exquisite head, clean lines, and athletic, substantial body.  But there are many other handsome breeds.  It is the Bull Terrier personality which is so utterly captivating and unique."
(Marilyn Drewes, Your Bull Terrier)

Terrier Group
White
The Bull Terrier must be strongly built, muscular, symmetrical and active, with a keen determined and intelligent expression, full of fire but of sweet disposition and amenable to discipline. 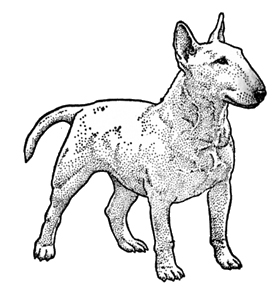 HeadÃ¢â‚¬Â¨ Should be long, strong and deep right to the end of the muzzle, but not coarse. Full face it should be oval in outline and be filled completely up giving the impression of fullness with a surface devoid of hollows or indentations, i.e., egg shaped. In profile it should curve gently downwards from the top of the skull to the tip of the nose. The forehead should be flat across from ear to ear. The distance from the tip of the nose to the eyes should be perceptibly greater than that from the eyes to the top of the skull. The underjaw should be deep and well defined.

Lips Ã¢â‚¬Â¨Should be clean and tight.

Teeth Ã¢â‚¬Â¨Should meet in either a level or in a scissors bite. In the scissors bite the upper teeth should fit in front of and closely against the lower teeth, and they should be sound, strong and perfectly regular.

Ears Ã¢â‚¬Â¨Should be small, thin and placed close together. They should be capable of being held stiffly erect, when they should point upwards.

Eyes Ã¢â‚¬Â¨Should be well sunken and as dark as possible, with a piercing glint and they should be small, triangular and obliquely placed; set near together and high up on the dog's head. Blue eyes are a disqualification.

Nose Ã¢â‚¬Â¨Should be black, with well-developed nostrils bent downward at the tip.

Neck Ã¢â‚¬Â¨Should be very muscular, long, arched and clean, tapering from the shoulders to the head and it should be free from loose skin.

Chest Ã¢â‚¬Â¨Should be broad when viewed from in front, and there should be great depth from withers to brisket, so that the latter is nearer the ground than the belly.

Body Ã¢â‚¬Â¨Should be well rounded with marked spring of rib, the back should be short and strong. The back ribs deep. Slightly arched over the loin. The shoulders should be strong and muscular but without heaviness. The shoulder blades should be wide and flat and there should be a very pronounced backward slope from the bottom edge of the blade to the top edge. Behind the shoulders there should be no slackness or dip at the withers. The underline from the brisket to the belly should form a graceful upward curve.

Legs Ã¢â‚¬Â¨Should be big boned but not to the point of coarseness; the forelegs should be of moderate length, perfectly straight, and the dog must stand firmly upon them. The elbows must turn neither in nor out, and the pasterns should be strong and upright. The hind legs should be parallel viewed from behind. The thighs very muscular with hocks well let down. Hind pasterns short and upright. The stifle joint should be well bent with a well-developed second thigh.

Feet Ã¢â‚¬Â¨Round and compact with well-arched toes like a cat.

Tail Ã¢â‚¬Â¨Should be short, set on low, fine, and ideally should be carried horizontally. It should be thick where it joins the body, and should taper to a fine point.

Coat Ã¢â‚¬Â¨Should be short, flat, harsh to the touch and with a fine gloss. The dog's skin should fit tightly.

Color Ã¢â‚¬Â¨Is white though markings on the head are permissible. Any markings elsewhere on the coat are to be severely faulted. Skin pigmentation is not to be penalized.

Movement Ã¢â‚¬Â¨The dog shall move smoothly, covering the ground with free, easy strides, fore and hind legs should move parallel each to each when viewed from in front or behind. The forelegs reaching out well and the hind legs moving smoothly at the hip and flexing well at the stifle and hock. The dog should move compactly and in one piece but with a typical jaunty air that suggests agility and power.

The Standard for the Colored Variety is the same as for the White except for the sub head "Color" which reads: Color. Any color other than white, or any color with white markings. Other things being equal, the preferred color is brindle. A dog which is predominantly white shall be disqualified.

Disqualifications: Ã¢â‚¬Â¨Blue eyes. Any dog which is predominantly white.